I will not be the first to suggest that landscape photography is a soothing tonic when life throws you setbacks. Yesterday I posted a video which touches on the importance of living your life with the mindset that whatever hard times get in your way, it is always important to remember the good. To reflect on what you have and the simple things in life that bring you joy. Bereavement of a loved one will play a part in most of our lives and we choose our own way on how to cope with it. My hike and landscape photography day in Eskdale in the The Lake District certainly eased my soul and reminded me how good life can be.

Its been a few weeks now since my Father passed away and I’ve been through several emotions such as shock, resentment, sadness and hope. I’m in no doubt there will be more but I need to accept and live my life and be thankful at the same time. I have always been a firm believer of the importance to escape. For me that comes with combining landscape photography with fell walking in the Lake District. The mountains, views and weather conditions take my creative mind on a short journey and today was no exception.

My plan was to climb Harter Fell in Eskdale from Jubilee bridge which sits at the bottom of the Western side Hardknott Pass. It was a Monday morning and the weekend had seen storm Dennis batter much of the United Kingdom. This was a week after storm Ciara had done exactly the same. There was still a blustery presence from where I started and I was set for another windy encounter which so often accompany me these days.

The higher I climbed towards Harter Fell, the heavier the wind became which came as no surprise. Every now and then I would stop to take in the views to the East where the light was backlighting the Coniston Fells. My face was being hit hard by the elements but everything was in control and life was still good. I continued to record these little moments of reflection and my travels up through the wonderful landscape that the Southern face of Harter Fell had to offer. The visibility quickly reduced and when I finally reached the trig point, clag had obscured any view and the backgrounds I had intended to shoot.

As I descended I was conscious that I had not taken a shot but all was not lost as I had made a mental note of a possible composition involving a cluster of fern trees in the near distance with a background of the Coniston fells backlit. I had spotted a lone tree which often tickle the strings of a landscape photographer. Further exploration was needed. To my disappointment the tree in question had seen better days and was looking more like the morning after rather than pre night out drinks time. Nothing worked and fell in line so I moved on. After several minutes, some wonderful rock patterns were emerging. May I still add, the wind was constantly attacking me. I was however nicely composed and shot this image below where I focused on the mid ground and processed with a split tone effect: 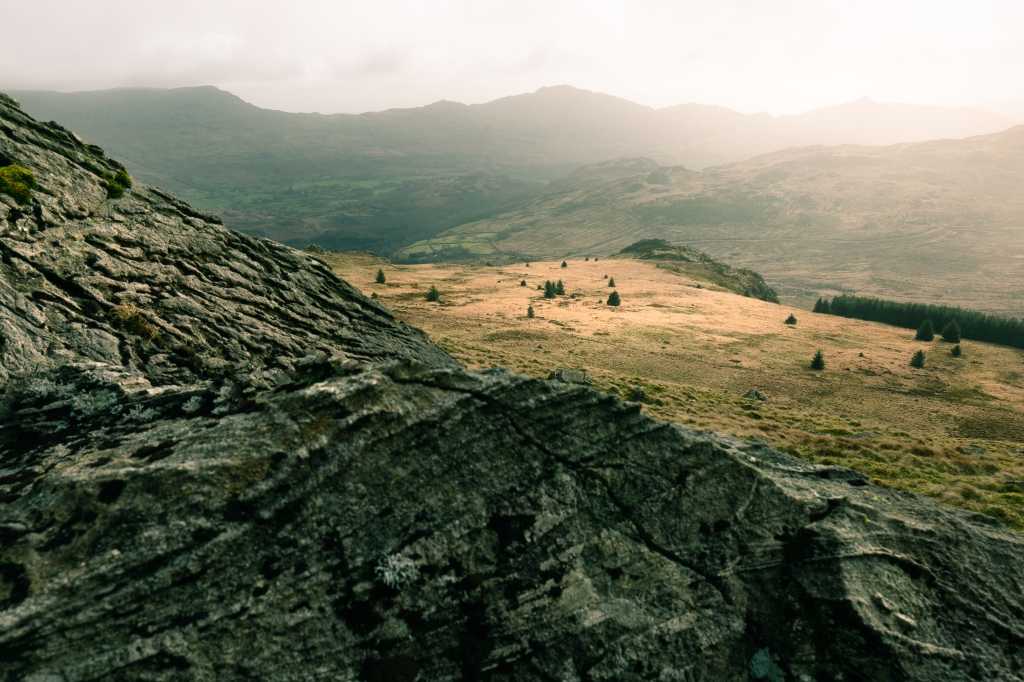 From Harter Fell (Eskdale) looking East towards the Coniston Fells

Dark, moody with a ray of light. Often it is said that your photography captures the emotion and state of mind you were in at the same time when the shutter release is pressed. I continued onto my next destination, Green Crag. Every so often I would stop, pause and lift my sight from the ground to take in my surroundings and enjoy the here and now moment. Mindfulness is such a strong tool and highly recommended.

The ground between Harter Fell and Green Crag was notoriously boggy and every footstep was like stepping on a sponge, making the walk difficult. The wind was still ferocious and unforgiving. I recall looking back at Harter Fell every so often as it’s conical shape revealed itself more, the further away I got. The rain momentarily swept across, hiding the fells head as I steadied myself for the final push up Green Crag.

At the summit I was met with some of the strongest winds I had witnessed, making both filming and finding a composition very difficult. I found some retreat however behind some crags and managed to capture a single handheld shot with my telephoto lens; 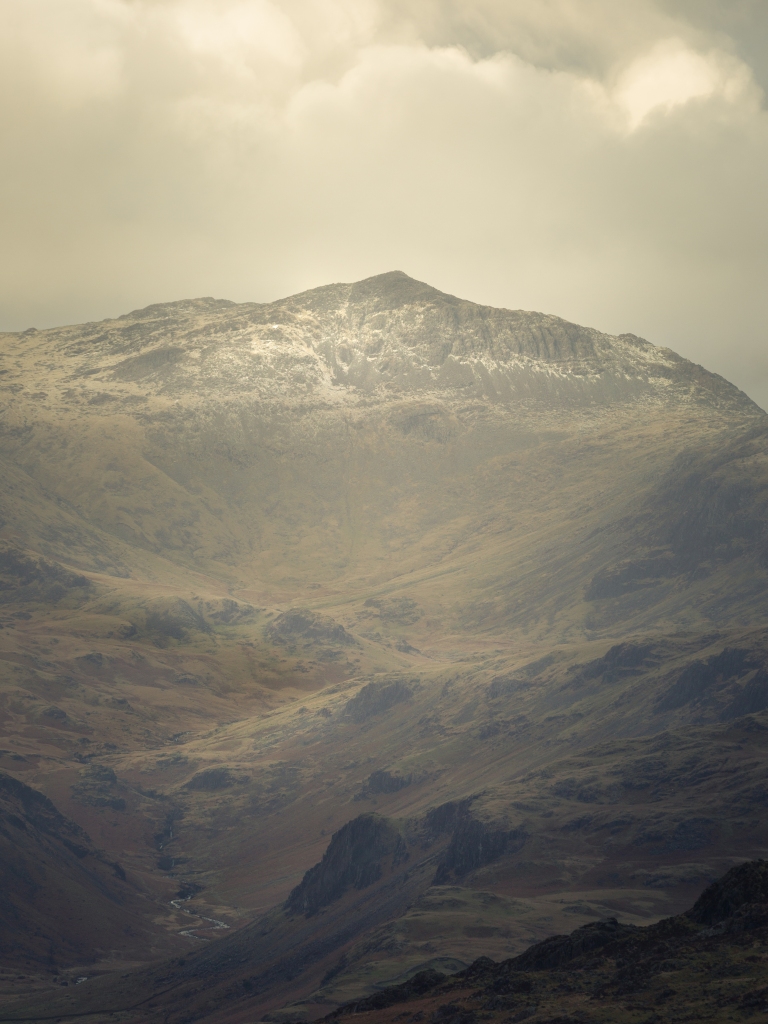 The last of the days light was fading and I has conscious I had a fairly strenuous walk back through the boggy path. As I was heading down from the summit of Green Crag, the sun appeared from behind me, revealing it’s beauty and casting it’s light on the numerous rocky crags of the surrounding landscape. This was one of those unplanned and frantic moments where luck needs to be on your side and provide me with some foreground interest. Harter Fell had revealed herself and was ablaze with some wonderful light. I knew it wasn’t going to last, it never does. This is what I managed; 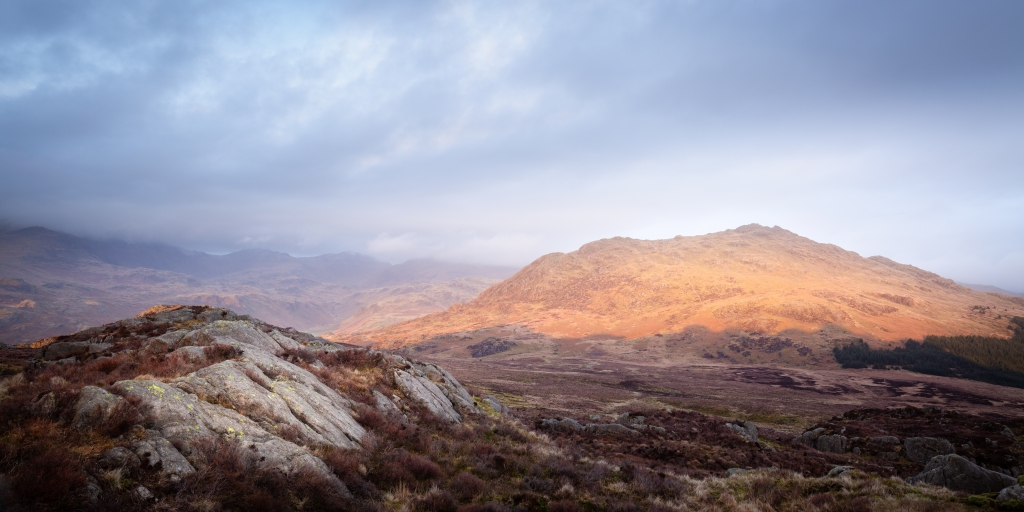 The day was finally done. I made a start to my journey back home, donned with my head torch, choosing my footsteps wisely through the sponge field. Softly smiling to myself, I reflected on what fun I had and looking forward to the next adventure. Looking forward to whatever ignites your flame, induces the endorphins, raises a smile is so important in a life that throws you hurdles.

3 thoughts on “Good for the mind”